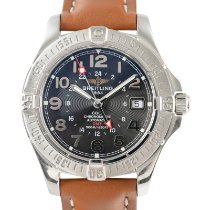 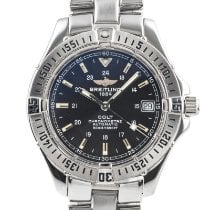 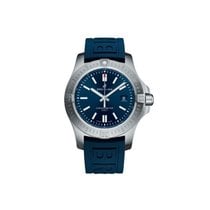 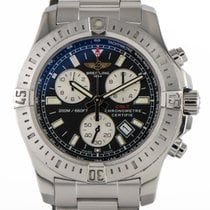 The men's and women's watches in the Colt collection are an affordable entry point into the world of Breitling. The manufacturer equips the different models with everything from COSC-certified automatic movements to high-precision quartz calibers.

Designed for the Military

The Colt collection sets itself apart with its robust stainless steel cases, water resistance to 20 bar (200 m, 656 ft), COSC-certified automatic calibers, and functional designs. Breitling originally designed this watch with the military in mind. A defining feature of the Colt is its set of four bezel rider tabs – a detail first seen on the Chronomat in 1984. Since then, these tabs have evolved into one of Breitling's signature components.

The Colt's stainless steel case is available in sizes ranging from 33 to 45 mm. The collection contains three-hand watches and chronographs. Both options are available with modified automatic or quartz ETA calibers. Regardless of which model you choose, it will have a screw-down case back and sapphire crystal with an anti-reflective coating on both sides.

The band options are vast, especially for later editions. Nearly every watch is available on a your choice of a stainless steel bracelet, leather strap, or rubber strap. The latter two typically match the watch's dial color.

Beginning in 2018, Breitling produced the Colt as a subcollection within the larger Avenger range. The manufacturer also treated the watch to a significant facelift. However, because these new models are so technologically and aesthetically similar to the Avenger, Breitling CEO Georges Kern decided to cease production of the Colt in 2020.

Reasons to Buy a Breitling Colt

How much does a Breitling Colt cost?

The Breitling Colt collection is home to numerous men's and women's watches. Automatic models from the 1990s and 2000s make particularly nice unisex watches thanks to their moderately-sized 38-mm cases. More recent editions are significantly larger at 41 and 44 mm in diameter. Prices range from around 1,400 USD for a simple quartz timepiece to about 4,400 USD for an automatic chronograph. You can purchase a mint-condition three-hand watch from the Automatic line for approximately 2,900 USD.

Three-hand models from the collection's final years have 41 or 44-mm cases. You can choose from blue, black, silver, and anthracite dials in two different styles. Models with reference numbers beginning with "A1738810" are slightly more elegant than their counterparts with references beginning with "A1738811." This is largely due to the former's lack of a 24-hour scale in the middle of its dial and its fine line minute track instead of a more prominent railroad minute track. That being said, A1738811 watches better reflect the Colt's military roots.

Each three-hand Colt Automatic features bar indices filled with SuperLuminova, enabling the wearer to tell the time in the dark. The watches also offer water resistance of 200 m (20 bar, 656 ft).

From a technological perspective, the two model lines are identical. Both use the Breitling caliber 17. This ETA 2824-2-based movement has central hands for the hours, minutes, and seconds. It also comes with a date at 3 o'clock and a 38-hour power reserve.

An A1738810 with a black dial and stainless steel bracelet will set you back roughly 2,800 USD. The version on a leather strap costs about 240 USD less. Prices for the A1738811 with a more traditional military aesthetic fall in a similar range.

You can time up to 12 hours using the Colt Chronograph Automatic. The Breitling 13 caliber, based on the Valjoux 7750, ticks away inside this watch and provides it with its 42-hour power reserve. The chronograph's design largely resembles that of the three-hand Colt Automatic. The greatest difference between the two models is the chronograph's subdials at 6, 9, and 12 o'clock. Older editions are 41 mm in diameter, while more recent timepieces measure 44 mm across. For the dial, you can choose from black, silver, or blue.

One special version comes with a black-coated stainless steel case and black dial. Together with a textile strap, this timepiece pays homage to the series' military heritage. Be sure to have roughly 4,400 USD on hand for one of these models.

Prices for the Colt With a GMT Function

From 2005 to 2011, Breitling also manufactured a GMT version of the Colt Automatic. These models can display the time in an additional time zone using a central red hand and a 24-hour scale. Unlike other Colt watches, which have bar indices, the GMT's dial features applied Arabic numerals. Breitling outfitted these timepieces with black, silver, and blue sunburst dials.

The Colt collection also includes numerous quartz watches. These models measure between 33 and 44 mm in diameter, so there are plenty of options for men and women alike. In terms of design, the quartz timepieces are similar to the collection's automatic watches. However, Breitling's characteristic rider tabs are missing from every model produced between 2011 and 2014.

and a date display sits at 4:30. A quartz chronograph on a stainless steel bracelet requires an investment of around 3,200 USD. The same watch on a leather strap sells for some 2,800 USD.

Like its larger siblings, the Colt Lady is water-resistant to 200 m (656 ft). Its bezel is available with striking diamonds. In addition to black, blue, or silver dials, Breitling also produced this women's watch with a mother-of-pearl dial. Versions with mother-of-pearl dials and diamond indices are particularly valuable. Be sure to have about 5,200 USD on hand for one of these timepieces on a steel bracelet.

Released in 2017, the Colt Skyracer stands out from the rest of the Colt collection. At 45 mm, it is not only the largest Colt model but is also constructed out of an extremely light and durable material: high-tech Breitlight made of composite fibers. A high-precision SuperQuartz movement also powers this watch, namely the Breitling caliber 74, which is based on the ETA Thermoline 955.652. This timepiece comes on a rubber strap and is water-resistant to 100 m (10 bar, 328 ft). The Skyracer changes hands for about 1,900 USD in mint condition.

What is a SuperQuartz caliber?

Breitling has been sending all of their movements to COSC for certification since the early 2000s. The Official Swiss Chronometer Testing Institute (COSC) tests the caliber for precision over a period of a few days. Breitling also sends their SuperQuartz calibers to be tested. Quartz calibers must meet stricter criteria than mechanical movements. Quartz movements may deviate from the reference time by no more than 0.07 seconds a day – that's equal to just 25.5 seconds a year. For comparison: A standard quartz caliber can reach this deviation in just one month. Breitling's SuperQuartz movements deviate by only 15 seconds a year, thus far surpassing COSC's requirements.