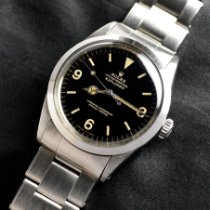 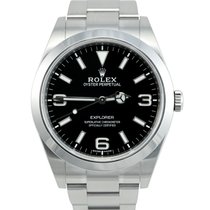 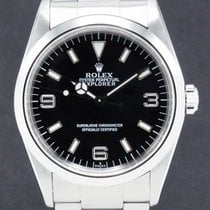 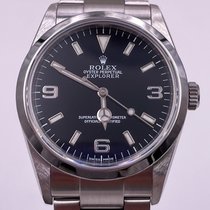 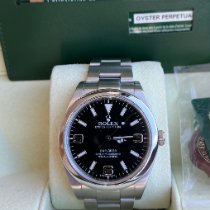 The Rolex Explorer is one of the most popular sports watches. Its sporty yet elegant Oyster design makes it the perfect companion for the office and on the go. The Explorer performs well financially and is thus also a worthwhile investment.

A Classic Sports Watch for Every Occasion

Watch enthusiasts around the world celebrate the Rolex Explorer for its robustness, reliability, and clean design. A black dial, large Arabic numerals at 3, 6, and 9 o'clock, along with the inverted triangle at 12 o'clock have been defining features of this timepiece since its debut.

Until 2021, Rolex constructed the Explorer's Oyster case exclusively with stainless steel. The release of the ref. 124273 represented a new dawn in the Explorer collection: It was the first two-tone model made of stainless steel and 18-karat yellow gold. Depending on the production period and reference number, Explorer watches measure either 36 or 39 mm, making them fantastic unisex timepieces.

Needless to say, in-house, chronometer-certified calibers, such as the current caliber 3230, provide these watches with their outstanding accuracy, while stainless steel Oyster bracelets keep them securely on the wrist. You'll also find many Explorers on leather or NATO straps on the pre-owned market. Vintage Explorers are outfitted with Plexiglas and water-resistant to 50 m (5 bar, 164 ft), while newer models were upgraded to sapphire crystal and offer an improved water resistance of 100 m (10 bar, 328 ft).

As with practically all Rolex sports watches, the Explorer has enjoyed excellent performance over the years. The ref. 214270 with a diameter of 39 mm is a good example. This model cost around 5,700 USD back in 2018, whereas in May 2022, you're looking at an investment of over 11,500 USD for a well-maintained timepiece.

Reasons to Buy an Explorer

Prices at a Glance: Rolex Explorer

How much does a Rolex Explorer cost?

About the Rolex Explorer

The first Rolex officially known as the "Explorer" debuted in 1953 under the reference number 6610. Its stainless steel Oyster case is 36 mm in diameter and water-resistant to 50 m (5 bar, 164 ft). Inside the case, you'll find the caliber 1030. This original model boasts many of the design elements that have since come to define the collection: a black dial; Arabic numerals at 3, 6, and 9 o'clock; and a large triangle at 12. During the production period, Rolex used radioactive radium for the luminous material.

Ten years after the ref. 6610, the ref. 1016 made its debut. Aesthetically, there is very little that differentiates this timepiece from its predecessor. However, it uses the caliber 1560 – or 1570 in later models – and has an improved water resistance of 100 m (10 bar, 328 ft) thanks to its Oyster case and Twinlock crown. Rolex also replaced radium with tritium to illuminate the dial. This model remained largely unchanged throughout the entirety of its 26-year production run, making the ref. 1016 one of the longest-lived timepieces in Rolex's history.

It is highly likely that the Explorer ref. 1016 will increase in value. Looking at the watch's trajectory since 2010, we can see that it has appreciated greatly. For example, a ref. 1016 in good condition changed hands for around 5,200 USD in 2010, while today the price has catapulted to 21,000 USD.

Sapphire crystal made its first appearance in the Explorer collection with the ref. 14270 in 1989. Rolex simultaneously rolled out their COSC-certified chronometer caliber 3000, while also refreshing the design of the dial. The three numerals now had a more modern style and were applied in the same manner as the indices. Rolex crafted both the numerals and indices out of 18-karat white gold, as this material doesn't tarnish over time.

In 2001, Rolex brought the ref. 114270 to market. This model also received some major changes to its interior, including the use of the caliber 3130. On the outside, the watch remained nearly identical to previous Explorers, except for its bracelet's solid end links and Fliplock clasp. It also featured a different luminous material: Super-LumiNova.

Viewing the long-term history of this watch provides prospective buyers with valuable information. In May 2012, for example, this reference cost around 4,200 USD. Exactly ten years later, this watch demands some 11,500 USD.

The Explorer with the reference number 214270 premiered in 2010. The main difference between it and previous models is its larger size at 39 mm. What's more, Rolex outfits this watch with the caliber 3132, which includes the Paraflex shock protection system and a blue Parachrom hairspring. Both components contribute to this watch's extraordinary resistance to temperature fluctuations, magnetic fields, and shocks. Like most Rolex watches, this movement is a certified "Superlative Chronometer."

Rolex switched from Super-LumiNova to blue Chromalight for the luminous material. Under normal lighting conditions, this material appears white and, thus, contrasts beautifully with the black dial. While the indices and hands have always had a glow-in-the-dark coating, the numerals 3, 6, and 9 first got this treatment in 2016. Furthermore, Rolex extended the length of the hands, which is most obvious on the minute hand.

At Watches & Wonders 2021, Rolex unveiled two new 36-mm Explorer models. The ref. 124273, as the first two-tone Explorer made of Oystersteel and yellow gold, caused quite a stir. The stainless steel ref. 124270, on the other hand, received a more understated reception.

Rolex also outfitted the smaller Explorers with the new caliber 3230, a self-winding, in-house movement. This caliber incorporates Rolex's patented Chronergy escapement and a blue Parachrom hairspring to protect against magnetic fields. The watch's power reserve was also optimized with this caliber, increasing from 48 to some 70 hours.

Although the official list price for the two-tone Explorer is around 11,000 USD, you should expect to pay around 14,000 USD if you want to skip the grueling waiting lists and buy directly from Chrono24. This 3,000 USD increase is no small feat, but still moderate compared to some other Rolex models.