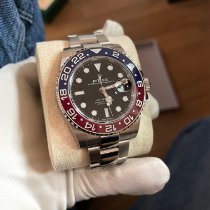 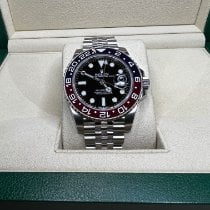 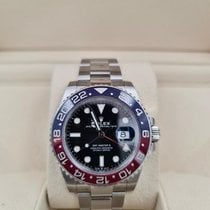 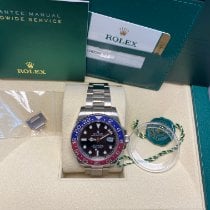 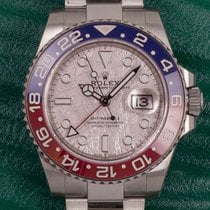 Chrono24 Buyer Protection Has You Covered

Performance of a Similar Model

Black
View listings for this model

Log in to view this watch's performance and estimated market value!

View listings for this model

The Rolex GMT-Master with its signature red and blue "Pepsi" bezel is treasured by collectors and investors. The striking tool watch has a second time zone and, on account of its outstanding potential for appreciation, makes for a good investment.

The story of the Rolex GMT-Master began in the 1950s when Pan American World Airways (Pan Am) commissioned the Swiss watch manufacturer to produce a timepiece for their pilots and flight attendants. The signature Pepsi bezel in red and blue has been the defining feature of these Rolex watches since the very first model in 1954. However, the two-tone design is not merely for aesthetic purposes; the red half symbolizes the daytime, while its blue counterpart symbolizes nighttime. ​

Over the last several decades, Rolex has released an array of different Pepsi references, all of which have remained faithful to the basic design. Rolex fans flock to the Pepsi GMT-Masters in appreciation of the subtle model upgrades that have been made over the years. However, as is typical of Rolex watches, high demand and limited supply mean that waiting lists for these models are growing endlessly. Don't be surprised if you have to wait several years to get your hands on one.

Needless to say, prices have risen considerably as a result of the huge popularity, and virtually all references have seen eye-popping value appreciation. The white gold model with a meteorite dial under the reference number 126719BLRO, for example, has gone up 30% since its debut in 2019. It's the same story for ref. 116719BLRO, which also comes in white gold. Long-term owners of ref. 16710 who have kept the watch in good condition have a cause for celebration: This GMT-Master Pepsi has increased in value by a whopping 200% in the last ten years. As you can see, a Rolex GMT-Master Pepsi is not only a stylish, functional timepiece, it's also a profitable investment.

Reasons to Buy a Rolex Pepsi

How much does a Rolex GMT-Master Pepsi cost?

As of publication in May 2022, the most affordable entry point into the world of Rolex GMT-Masters with Pepsi bezels was approximately 15,000 USD. This will get you either a vintage reference 16700 or 16710 with an aluminum bezel. The ref. 16710 was the first GMT-Master model to be fitted with scratch-resistant sapphire crystal, replacing the acrylic glass that was used in previous models.

The GMT-Master ref. 16750 was brought to market in 1981 and was the first model to have a stop-seconds mechanism and a quickset function for the date. Although this reference cost approximately 10,000 USD back in 2018, you can expect to pay around 18,000 USD for a well-maintained timepiece from this collection today.

The ref. 1675 was part of the Rolex catalog for over 20 years and is now one of the most sought-after Pepsi models. Depending on the condition, prices for this reference come in at around 21,000 USD. Again, this is quite an increase in comparison to 2018, when the model cost about 7,500 USD.

The bezel inlays on the earlier ref. 6542 models were made of Bakelite, a synthetic plastic, which the manufacturer quickly swapped for aluminum. Plan to spend about 43,000 USD for a ref. 6542 in good condition. Especially well-maintained models can cost significantly more. For this reference, it is worth looking at a longer period when it comes to price development. Although prices have been relatively stable since 2018, the watch's value has as good as doubled over the last decade.

In 1982, Rolex added the GMT-Master II ref. 16760 to the mix. Thanks to its somewhat thicker case, Rolex fans dubbed this model the "Fat Lady." Rolex equipped this watch with a black and red bezel, meaning it isn't actually a Pepsi watch, but rather a Rolex Coke. Nevertheless, it had certain features that would also be significant for future Pepsi models. For example, its caliber, the 3085, allowed the center hour hand to be set independently of the 24-hour hand, letting the wearer easily set the watch to the local time by having the center hour hand "jump" from one hour to the next, forward or backward. Together with the rotatable 24-hour bezel, the wearer could also now compute a third time zone. In addition, Rolex provided this watch with a larger crown protector and replaced the plexiglass with sapphire crystal. You can purchase a "Fat Lady" in good condition for around 15,000 USD. The value of this model has increased by about 100% in the last four years, so there's no disputing its popularity among watch enthusiasts.

The next stage in the Pepsi's evolution followed with the 1989 release of the reference 16710. Rolex first outfitted this timepiece with the caliber 3185 and later with the caliber 3186. This version is available as a "Coke" model or with a solid black bezel. These watches were also the first to use Super-LumiNova instead of tritium as their luminous material. Prices for a pre-owned Coke watch start at around 15,000 USD. If you're interested in a Pepsi bezel and tritium dial, a pre-owned model will set you back around 18,000 USD. Again, it's worth considering the prices in 2018, when both versions were still available for around 8,000 USD.

The GMT-Master Pepsi With a Cerachrom Bezel

In 2014, Rolex released a GMT-Master II with a Pepsi bezel, which can be found under the reference number 116719BLRO. Unlike its predecessors, this model is only available with an 18-karat white gold case. What's more, the Swiss watch manufacturer furnished it with a Cerachrom ceramic bezel, a triple-sealed Triplock crown, and a "maxi dial" with enlarged, glow-in-the-dark indices. The caliber 3186 with a Parachrom hairspring ticks away inside this watch. New, one of these watches costs about 56,000 USD, which is an increase of over 21,000 USD compared to what it cost in 2020.

At Baselworld 2018, Rolex announced that they would be adding a stainless steel GMT-Master II with a Cerachrom Pepsi bezel (ref. 126710BLRO) to their portfolio. In addition to the material and slightly altered case design, the watch manufacturer also made changes to the inside of this model. It is now powered by the in-house caliber 3285, which features Rolex's patented Chronergy escapement. Thanks to the use of a nickel-phosphorus alloy, this escapement is not only impervious to magnetic fields but also much more efficient. It also features a new Jubilee bracelet in Rolex's proprietary Oystersteel stainless steel.

This edition is in high demand. If you can find an offline retailer willing to sell you one, expect it to come with a long waiting period. This scarcity has caused prices for this model to skyrocket: We are now seeing listings that are more than triple the original retail price. When it was released, the ref. 126710BLRO had an official list price of "only" 9,500 USD. As of 2022, a mint-condition timepiece will set you back some 32,000 USD. Rolex themselves currently demand around 11,000 USD for this GMT-Master model.

Rolex unveiled two new GMT-Master models featuring a red and blue Cerachrom bezel in 2019. Both timepieces are powered by the caliber 3285, made of white gold, and can be found under the reference 126719BLRO. The version with a blue dial costs around 71,000 USD in mint condition; its value has risen by roughly 21,500 USD since the middle of 2021.

The second model is technically identical, but you will instantly recognize its bright meteorite dial. Rolex claims the dial material has cosmic origins, coming from the center of an asteroid or exploded planet! Listings on Chrono24 for this galactic timepiece in mint condition are priced up to 102,000 USD, meaning they have more than doubled in value since May 2021.