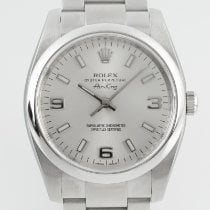 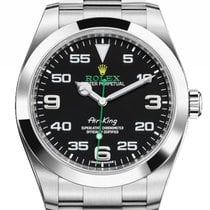 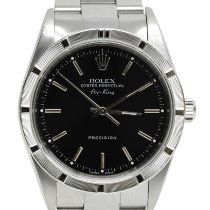 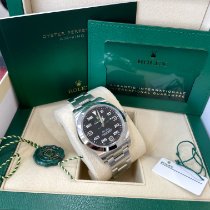 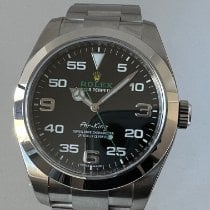 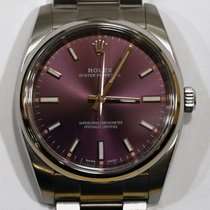 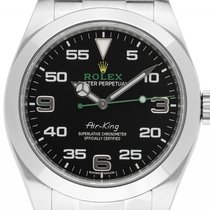 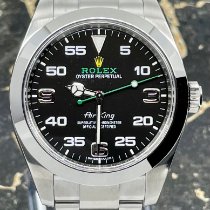 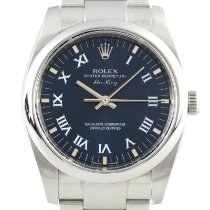 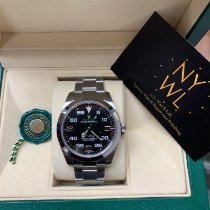 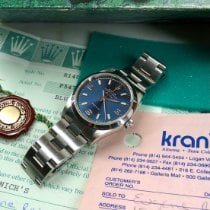 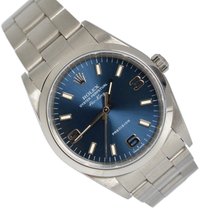 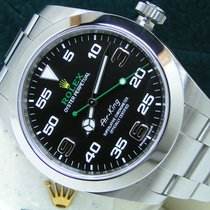 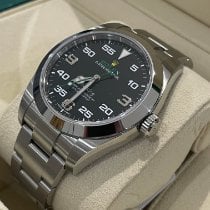 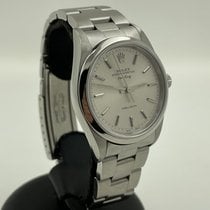 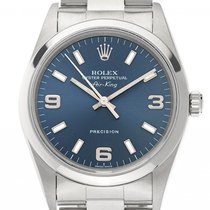 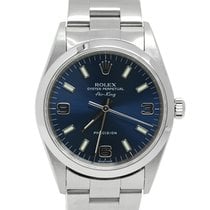 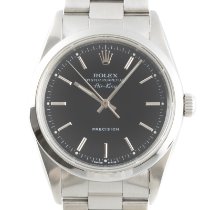 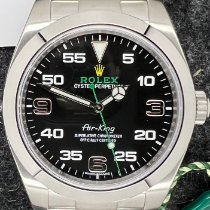 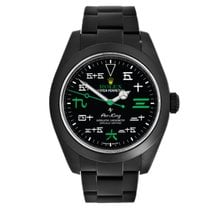 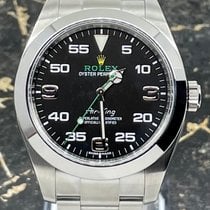 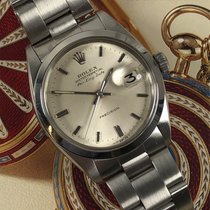 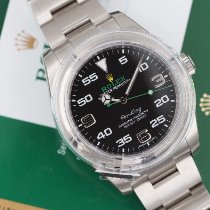 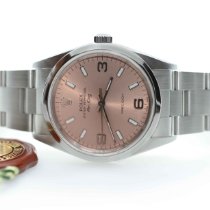 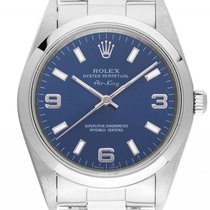 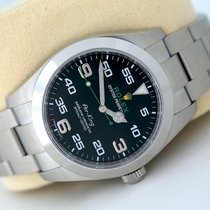 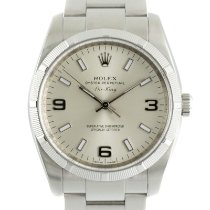 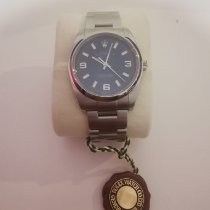 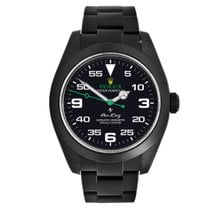 The Air-King is Rolex's pilot's watch and one of the Swiss manufacturer's most affordable models. Made of stainless steel, its design is sporty, elegant, and functional. As a result, it's the perfect wristwatch for nearly every occasion.

With its golden Rolex crown, Arabic numerals from 5 to 55, and green minute hand and brand inscription, the Air-King ref. 116900 stands out from the crowd. The stylized "Air-King" inscription on the dial's lower half is yet another attention-grabbing detail. Introduced in 2016, Rolex looked to classic pilot's watches for inspiration when designing this timepiece. As a result, the manufacturer decided to forgo any additional functions and instead focus on the bare essentials. Thanks to its numerals and green accents, the Air-King is much sportier than other entry-level Rolex models like the Oyster Perpetual.

Since 2016, Rolex has only offered one Air-King model. It has a 40-mm Oyster case made of stainless steel. The combination of a screw-down case back and Twinlock crown lend this timepiece a water resistance of 100 m (10 bar, 328 ft). A three-piece link Oyster bracelet with a satin-brushed finish holds the watch securely on the wrist and underscores its role as a tool watch. Finally, the Easylink extension system enables you to adjust the bracelet length on warm days, for example.

While the current collection is limited to a single model, Rolex previously produced all sorts of Air-King watches. Some of the most famous references include the 14000, 14000M, 14010, 14010M, and the 5500. In fact, the 5500 was in production for over three decades, which is why the pre-owned market is full of vintage timepieces with this reference. Rarer models, such as those featuring Mickey Mouse or the Pan Am logo, are especially popular among collectors.

Reasons to Buy a Rolex Air-King

Prices at a Glance: Rolex Air-King

How much does a Rolex Air-King cost?

Financially, the Air-King ref. 116900 has recently done quite well on Chrono24. This stainless steel watch was demanding less than its list price until the second half of 2019, at which point prices began to steadily rise. By early 2020, it was selling for around 7,900 USD in mint condition. Used watches have also seen significant value appreciation.

If you'd like a Rolex but don't have over 6,000 USD to spend, you should consider an older Air-King model. At 34 mm in diameter, they are much smaller than their more modern counterparts; however, they also exude the unique charm of decades gone by. Their moderate size also makes them a fantastic choice for women. More recent models include the refs. 14010M and 14000M, both of which use the caliber 3130 and cost as little as 4,100 USD pre-owned. You can recognize the 14010M by its "engine-turned" bezel with fine fluting and small rider tabs. The 14000M, on the other hand, has a polished bezel.

The most affordable vintage Air-Kings bear the reference number 5500. Rolex introduced this timepiece in 1957 and produced it for over 30 years. Used watches change hands for about 3,300 USD. With any luck, you might even find a well-maintained version for less than 3,000 USD. Collectors should be on the lookout for "Double Red" models, which have two red inscriptions reading "Air-King" and "Super Precision."

The first generation of the Rolex Air-King had the reference number 4925, was introduced in the mid-1940s, and is particularly interesting for fans of vintage Rolex watches. That being said, very few examples of this watch are available on the market today.

The Rolex Air-King ref. 114200 was part of the collection from 2007 to 2016. Watches from this era feature the "Air-King" inscription on their dials. This model still exists today; however, Rolex has removed the inscription and now refers to this timepiece as the Oyster Perpetual 34. Prices for these watches range from 4,700 to 5,500 USD. Both the ref. 114200 and the 2016 ref. 116900 get their power from chronometer-certified calibers.

If having a chronometer-certified timepiece is not particularly important to you and you're looking to save a few hundred dollars, the Rolex Oyster Perpetual Air-King with the reference number 14000 may be the right watch for you. This is the predecessor to the 14000M and houses the caliber 3000. You can buy a pre-owned version for around 4,100 USD. Never-worn watches are hard to find and more expensive. Expect to pay upwards of 4,700 USD.

The Rolex Air-King With a Date Display

You can find the Rolex Air-King Date with a date display under the reference numbers 5700 and 5701. Plan to spend about 3,900 USD for one of these pre-owned timepieces with a distinctive Cyclops lens. At 35 mm, the Air-King Date is one millimeter larger than the editions without a date.

Is the Air-King the right watch for me?

If you've been toying with the idea of buying a Rolex, the Air-King may just be the right model for you. Both vintage and modern editions are relatively affordable and have designs that embody the simplicity and sportiness associated with Rolex. At 34 mm, older models are suitable for women and men with smaller wrists. The current Air-King ref. 116900 is a contemporary 40 mm in diameter and the perfect watch for everyday wear. Its design is sporty yet elegant, making it a great choice for both in and out of the office.

The price of an Oyster Perpetual 39 is a few hundred dollars less than an Air-King, coming in at around 6,600 USD. The Explorer offers something a bit sportier and has the same 39-mm diameter as the Oyster Perpetual. This timepiece costs roughly 8,300 USD. It's hard to miss the Air-King's large Arabic numerals, green second hand, and green brand inscription, all of which further underscore its sporty character. In the end, it is more a question of taste than price.

A Variety of Designs: Dials and Bezels

The Air-King has featured a diverse range of dials and bezels throughout its 70-year history. With bar indices, Arabic numerals, Roman numerals, rhodium-plated surfaces, and orange contrasts, Air-King models have a wide variety of looks to offer. The dial is available in different colors such as soft pink, blue, red, or green.

However, the basic design of the watch has remained consistent. Its stainless steel case is the same shape as almost all other Rolex models. The differences are in the details. The top surfaces of the case and the bracelet are satin-brushed, while the sides are polished. The case has a standard size of 34 mm, which is relatively small by modern standards. However, the Air-King didn't always come in the Oyster case. In the 1950s, Rolex used the Explorer case for the Air-King, resulting in a 1-mm increase in size. Thanks to the screw-down Twinlock crown, the final watch is water-resistant to 10 m (10 bar, 328 ft).

You have three options for the bezel: polished, fluted, or engine-turned. Models with the reference number 114234 have a decorative ring made of white gold. Newer models feature sapphire crystal, giving the wearer a clear view of the dial, while vintage 5500 timepieces come with acrylic glass.

The History of the Rolex Air King

Rolex founder Hans Wilsdorf developed this timepiece in honor of pilots from the British Royal Air Force. The RAF had used Rolex watches before the start of the Second World War. Their 34-mm cases were larger and more reliable than the standard models used by the Air Force. Towards the end of the 1930s, Wilsdorf developed a line of watches with the names "Air-Lion," "Air-Tiger," "Air-Giant," and "Air-King." After the end of the war, Rolex only continued producing the Air-King and made it available to the public.

Rolex produced the Air-King under the reference number 5500 for about 37 years. Starting in 1957, they introduced new calibers, including the 1520 and 1530. The American version of the 1520 movement only had 17 jewels due to import regulations, while in Europe, it had 26 jewels. The 1530 caliber had versions with 17, 25, or 26 jewels. The dial inscription "Precision" (caliber 1520) or "Super Precision" (caliber 1530) signifies which movement powers the watch.

The automatic caliber 3000 replaced the previously used movements in the 1990s. The 3000 runs at 28,800 vibrations per hour (vph). It also boasts a bidirectional winding rotor and a Breguet overcoil. The Breguet overcoil has an upraised final coil and reduced curvature, which results in improved precision.

In celebration of the new millennium, Rolex fitted the Air-King with the caliber 3130, the same movement that powers Submariner models without a date display. You can spot Air-Kings with the 3130 by the letter "M" (for modified) added to the end of their reference numbers. Fine regulation of the movement takes place via Microstella nuts on the balance rim, as is typical of Rolex timepieces. Usually, a regulator is required. In 2007, Rolex began delivering the Air-King with a chronometer certificate, proof that it was certified by the Official Swiss Chronometer Testing Institute (COSC).

In 2007, the Air-King received an extensive makeover. Concentric, rhodium-plated dials and colorful Arabic numerals are characteristic of some designs. The distance between the case and lugs was reduced, and the watch's thickness grew to 11.5 mm. Furthermore, the updated timepiece came with the new 70190 stainless steel Oyster bracelet with an improved clasp and 19-mm lug width.

When viewed in profile, this Air-King model resembles the dome of a cathedral. This is due to the domed sapphire crystal, as well as the large bezel. Typical of a Rolex watch, the crystal projects out from the case, giving it a more voluminous look. Connoisseurs call it a "bubble-back" case, as it resembles the bulbous shape of the first Oyster Perpetual from 1931. Back then, the cases were round and resembled a bubble. Rolex's patented winding rotor was responsible for this shape.

The Genevan manufacturer temporarily ceased production of the Air-King in 2014. Only two years later, Rolex presented a new model with a 40-mm case, large Arabic numerals, and a black dial. Together with its prominent minute scale, the design of the numerals highlights the Air-King's pilot's watch aesthetic. This watch borrows its larger numerals at 3, 6, and 9 from the Rolex Explorer. The Mercedes-style hour hand is a standard feature of Rolex sports watches and, like the minute and second hands, is coated with a layer of bright, glow-in-the-dark Chromalight. All of the indices and the large triangle at 12 o'clock also feature this luminous material so you can always have an eye on the time, even in the dark.

Hallmarks of the Rolex Air-King ref. 116900 are its green second hand and green brand inscription at 12 o'clock. The curvy "Air-King" inscription above 6 o'clock is a nod to the original Air-King. Its satin-brushed Oyster bracelet includes an Oysterclasp and the Easylink comfort extension system, which you can use to extend the bracelet by 5 mm. The polished stainless steel bezel lends the Air-King a touch of elegance.

An Alternative to the Rolex Air-King

At around 6,500 USD, the Oyster Perpetual 39 is even more affordable than the Air-King and, thus, makes a fitting alternative. It has served as the entry point to the world of Rolex since 2014. Like the Air-King, its case is water-resistant to 100 m (10 bar, 328 ft), but is one millimeter smaller. Another difference is its overall more elegant dial with indices and monochromatic inscriptions. Instead of sporty Mercedes hands, the Oyster Perpetual 39 features baton hands. As for the movement, Rolex equips this timepiece with the caliber 3132, which you can also find in the Explorer.